Helen Keller was born in Tuscumbia, Alabama on June 27th 1880. Her full name is Helen Adams Keller. Her father Arthur Henley Keller and mother Catherine Everett (Adams) Keller were part of slaveholding elite before the war, but lost status later.

Helen Keller was born healthy. At the age of 19 months, she contracted with an illness acute congestion of the stomach and the brain”. The illness may be a scarlet fever or meningitis. This illness caused Keller to lose her hearing and seeing ability leaving her both deaf and blind.

Helen Keller being both deaf and blind, communication was the real challenge that too being a kid. Only one of the cook’s daughter used to understand few of her signs. By the time Keller was 7 years old, she had more than 60 signs to communicate with her family. She was able to identify the family members with the vibration of their footsteps. Helen Keller enjoyed the music with the feel of the beat and was connected with pets through touch.

Helen Keller was introduced to Alexander Graham Bell, who was working with the deaf children then. Bell referred Keller to Perkins Institute for the Blind located in South Boston. Anne Sullivan, who herself was a person with visual impairment became Keller’s instructor at Perkins Institute.

Sullivan began teaching Keller by spelling words into her hand. Keller was initially frustrated to know that every object has a name and she has to learn it. Sullivan started by spelling ‘D O L L ‘ in her hand to show the doll she presented to Keller. The experiential learning reached to an extent that Sullivan spelled water on her one palm and flowing cool water on another hand. Slowly Keller started imitating her teacher within a month breaking the barrier of communication.

After studying at Perkins Institute, Keller joined The Cambridge School for Young Ladies in 1896 and later attended Radcliffe College of Harvard University in 1900. In 1904, at the age of 24, Keller graduated as a member of Phi Beta Kappa from Radcliffe, becoming the first deaf-blind person to earn a Bachelor of Arts degree.

Helen Keller as a speaker and author

Austrian philosopher and pedagogue, Wilhelm Jerusalem was one among the first to find the literary talent in Keller. Rest of the life Helen Keller spent by giving speeches and lectures on aspects of her life.

One of her early speeches ‘Strike Against War’ was at Carnegie Hall, New York City on January 5, 1916. Later she travelled almost 35 countries to uplift the spirit of people with disabilities. She was inspiring people with her speeches and lectures for almost 50 years. 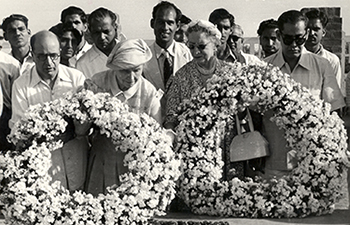 Watch her speech at Sydney Deaf and Dumb Institute.

Helen Keller worked with American Foundation For the Blind for more than 40 years. She wrote 12 published books and several articles. At the age of 22 she published her autobiography ‘The story of my life’

Helen Keller suffered series of strokes in 1961 and have spent later of her life at her home. She was died on June 1st, 1968.

On September 14, 1964, President Lyndon B. Johnson awarded her the Presidential Medal of Freedom, one of the United States’ two highest civilian honors. In 1965 she was elected to the National Women’s Hall of Fame at the New York World’s Fair.

The best and most beautiful things in the world cannot be seen or even touched – they must be felt with the heart.

Rakesh Paladugula is a dedicated accessibility enthusiast with wide experience on all forms of digital accessibility. He is a trainer, mentor, advisor, advocate and evangelist. He believes in the modern socio-scientific world digital accessibility is a fundamental right of every citizen including those who have disabilities, low literacy and are from economically backward. View more posts